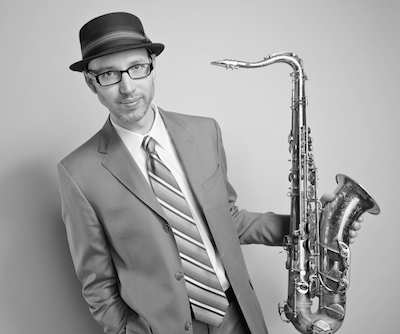 The Peter Sommer Quartet, featuring Steve Kovalcheck on guitar, plays the music of the great American composers Duke Ellington and his close collaborator Billy Strayhorn. Ellington and Strayhorn defined the sound of jazz from the early days through the golden era and well into the 1960's. The Peter Sommer Quartet will perform classic and new arrangements of tunes both well-known and obscure from the Ellington/Strayhorn Songbook.

Peter Sommer has contributed his energetic tenor playing and creative spirit to a wide variety of musical projects ranging from mainstream bebop to avant garde and beyond at venues around the world. Although rooted deeply in the great jazz tradition, Peter continues to search for the mystery in music making and takes great joy in sharing the present moment with the listener.

Peter has released four albums as a bandleader, is a regular member of the Ken Walker Sextet, Ninth and Lincoln (modern big band under the direction of Tyler Gilmore), the Wil Swindler Elevenet, the Fred Hess Big Band, the Colorado Jazz Orchestra, the New Third Stream Saxophone Quartet and is an honorary member of the Russian Dragon Band. He also performs often as a soloist, in duo with Art Lande, and as a leader of his own quartet and septet. Peter has performed with the Dallas Symphony Orchestra, the Colorado Symphony Orchestra and the Colorado Music Festival Orchestra. He has also performed at IAJE International Conferences in Anaheim and Toronto, Canada, and has performed at World Saxophone Congresses in Valencia, Spain, Bangkok, Thailand, St. Andrews, Scotland and Strasbourg, France. Peter is a Professor of Jazz Studies and Saxophone at Colorado State University in Ft. Collins. At CSU, Mr. Sommer directs Jazz Ensemble I and coordinates the Jazz Studies department.